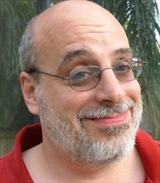 Adam-Troy Castro has a B.S. from Cornell University in Communications. Castro has contributed almost eighty short stories that appear in a variety of publications. He has also written book reviews for SciFi Magazine. Castro lives in Florida with his wife and four cats.

Unauthorized Harry Potter: Everything You Ever Wanted to Know About the Harry Potter Series (2006)

Search Worldcat for availability of books at your local library.
Click Adam-Troy Castro to visit his site.