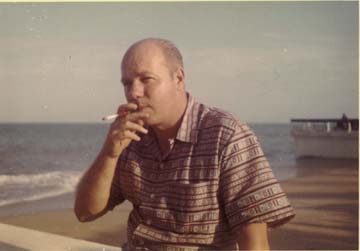 
Charles Ray Willeford (1919-1988) is considered to be one of the greatest American hard-boiled crime fiction writers. He moved to West Palm Beach in 1953, and graduated from the University of Miami, where he also taught. "A writer of sharp, often sardonic prose coupled with dark wit, Charles Willeford belongs as much to the school of Nathanael West and Flannery O'Connor as among his hard-boiled crime-writing contemporaries. While his novels all inevitably contain crime and vice, it was only in the last years of his life that he achieved notoriety as a detective novelist with a series of four books that follow the personal and professional escapades of Miami police officer Hoke Moseley. The Moseley novels, published between 1984 and 1988, brought about a much deserved rediscovery of Willeford and resulted in the return to print of his strongest early works. "(Levin)


Book List
(some published posthumously)
The Second Half of the Double Feature, (short stories), Wit's End (2003)
Deliver Me from Dallas!, Dennis McMillan (2001)
Collected Memoirs of Charles Willeford: I Was Looking for a Street: Something about a Soldier (2000)
The Shark-Infested Custard (fiction; includes Kiss Your Ass Goodbye and a portion of Everybody's Metamorphosis) (1993)
The Cockfighter Journal (diary from the filming of his 1962 novel) (1989)
I Was Looking for a Street (autobiography) (1988)
Charles Willeford Trilogy: High Priest of California, Play, Wild Wives (Wild Wives originally published as Until I Am Dead) (1987)
New Forms of Ugly: The Immobilized Hero in Modern Fiction (literary criticism) (1987)
Kiss Your Ass Goodbye (1987)
Something about a Soldier (autobiography) (1986)
Off the Wall (fictionalized biography of "Son of Sam" killer David Berkowitz) (1980)
A Guide for the Undehemorrhoided (autobiography) (1977)
The Burnt Orange Heresy, (1971)
Poontang and Other Poems, (1967)
The Machine in Ward Eleven (short stories) (1963)
Cockfighter (1962)
No Experience Necessary (1961)
Understudy for Death, 1961 (reprinted as Understudy for Love (1989)
The Director, 1960 (reprinted as The Woman Chaser (1990)
The Black Mass of Brother Springer (later published as The Honey Gal) (1958)
The Basic Approach (television play), Canadian Broadcasting Corporation (CBC) (1956)
Lust Is a Woman (1956)
Pick-Up (1955)
Until I Am Dead (1954
High Priest of California (1953)
Proletarian Laughter (poems) (1948)

Will Charles
The Hombre from Sonora, 1971

Other
"Entrance to an Era," "In Time of This," "I Passed over the River," "Basement Pastoral," "The Apocalypse," in The Outcast Poets, edited by Oscar Baradinsky, The Outcast Poets Series of Chapbooks, no. 8 (Yonkers, N.Y.: Alicat Bookshop Press, 1947).