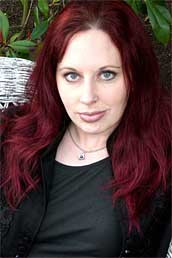 
Cherie Priest is the author of several books of fantasy and horror. Priest is also writing a new series that is in the new genre known as Steampunk. The first title of this series is called Boneshaker. She was born in Tampa, FL and has spent stints of her life in various parts of Florida as well as around the United States.


Search Worldcat for availability of books at your local library.
Click Cherie Priest to visit her blog.