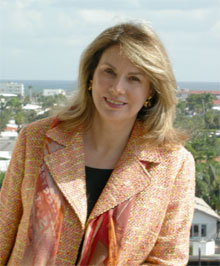 Elaine Viets (1950-) currently writes two humorous mystery series. The Dead-End Job mysteries are all set in the Fort Lauderdale area. Viets takes her research seriously; she has worked every job featured in her books. For instance, to do research for Murder Between the Covers, set in a bookstore, she spent six months working at her local Barnes & Noble.

The Josie Marcus Mystery Shopper series is set in her hometown of St. Louis, Missouri. The main character is a mystery shopper, and Viets knows about that second-hand; her mother was a mystery shopper. Viets also wrote the Francesca Vierling humorous mystery series set in St. Louis as well.

Viets started her writing career as a journalist for the St. Louis Post-Dispatch. She wrote a human interest column about local issues for 25 years. She also hosted the local light-news television program, "Viets Beat", for which she won Emmy Awards in 1989 and 1990. After moving to Washington D.C. and leaving the Post-Dispatch, Viets wrote a syndicated column carried by United Feature Syndicate and later by United Media.

Viets suffered a stroke in April, 2007 but has recovered and is still writing.

Search Worldcat for availability of books at your local library.
Click Elaine Viets to visit her site.