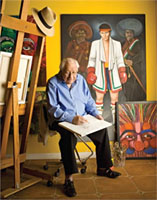 Ferdie Pacheco was born in Tampa, Florida. His talents are many and widely varied. Pacheco has been an artist, pharmacist, medical doctor to famous boxers and author. Pacheco now mostly paints as his creative outlet and his work can be seen across South Florida.