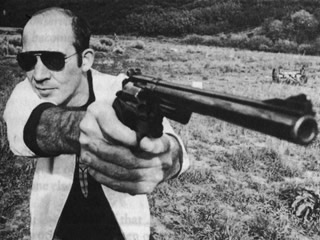 
Hunter S. Thompson was in the air force and stationed at Eglin Air Force Base near Pensacola, Florida. He was the sports editor of the base newspaper, The Command Courier, and also wrote for The Playground News in Fort Walton Beach, Florida. Best known for creating a journalistic style known as "gonzo journalism" that blurs the line between nonfiction and fiction.

Fear and loathing in America : the brutal odyssey of an outlaw journalist, 1968-1976
Fear and loathing in Las Vegas : a savage journey to the heart of the American dream
Generation of swine : tales of shame and degradation in the '80s
Hell's Angels : a strange and terrible saga
Hey Rube : blood sport the bush doctrine and the downward spiral of dumbness
Kingdom of fear : loathsome secrets of a star-crossed child in the final days of the American century
The proud highway : saga of a desperate southern gentleman, 1955-1967
The rum diary : the long lost novel
Screw-jack