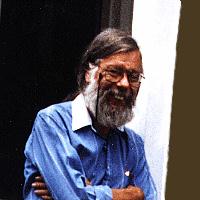 
Jack C. Haldeman, II (1941 - 2002) was born in Hopkinsville, Kentucky, but lived in Gainesville, Florida at the time of his death in 2002. Haldeman was a unique science fiction writer in that he was often able to include a sports theme in his writing. This is best demonstrated in his short story, "Louisville Slugger", about a baseball game between humans and Arcturians that is played to determine the fate of the planet. Jack Haldeman has written several novels including There Is No Darkness which he wrote in collaboration with his brother, famed science fiction writer, Joe Haldeman.

Bill, the Galatic Hero on the Planet of Zombie Vampires, 1991