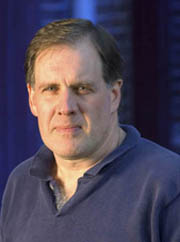 
James Swain is the author of eight best selling novels. His books have been chosen as Mysteries of the Year by Publisher's Weekly and Kirkus Reviews, and have received two Barry Award nominations. In 2006, he was awarded the Prix Calibre 38 for best American Crime Fiction. He lives in Florida with his wife Laura.
Book List


Search Worldcat for availability of books at your local library.
Click James Swain to visit his site.