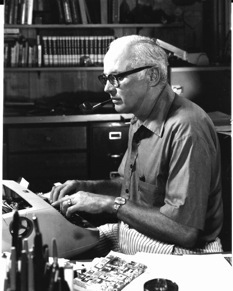 
John D. MacDonald (1916-1986) was born in Sharon, PA and always dreamed of being a writer. After earning his college degrees, including an MBA from Harvard, MacDonald started to seriously write. MacDonald's most well known works were hard boiled crime thrillers that were set vividly in the Florida lanscape. Today, many authors owe a debt of gratitude to MacDonald for being the first to do this.