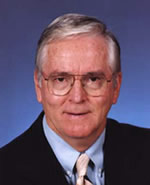 Kevin McCarthy is an English professor at the University of Florida. He also before coming to Florida taught in the Middle East as a Peace Corps volunteer. Today he writes textbooks on grammar as well as many non-fiction books about Florida, football, and other varied topics.

See Kevin McCarthy books with a Florida setting.
See also It Takes Place in Florida: History or Sports and Recreation or Travel.

Search Worldcat for availability of books at your local library.
Click Kevin McCarthy to visit his site.