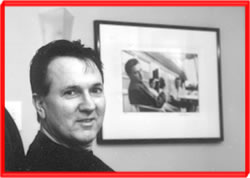 Robert Ferrigno (1947 - ) is an American author of crime novels. After receiving his degree in Philosphy, Filmmaking and Creative writing, he returned to his first love, poker for the next five years where he got the idea for his characters on most of his novels. Ferrigno founded a punk rock magazine called The Rocket with his earnings from gambling.

Search Worldcat for availability of books at your local library.
Click Robert Ferrigno to visit his site.