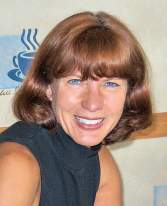 
Sandra Balzo turned to mystery writing after twenty years in corporate public relations, event management, and publicity in Milwaukee. Balzo has handled publicity for three Bouchercons (World Mystery Conventions), as well as the International Association of Crime Writers, and has served a national board member of Mystery Writers of America. Balzo's novels have been nominated for both the Anthony and Macavity awards and received starred reviews from Kirkus and Booklist.

Search Worldcat for availability of books at your local library.
Click Sandra Balzo to visit her facebook page.